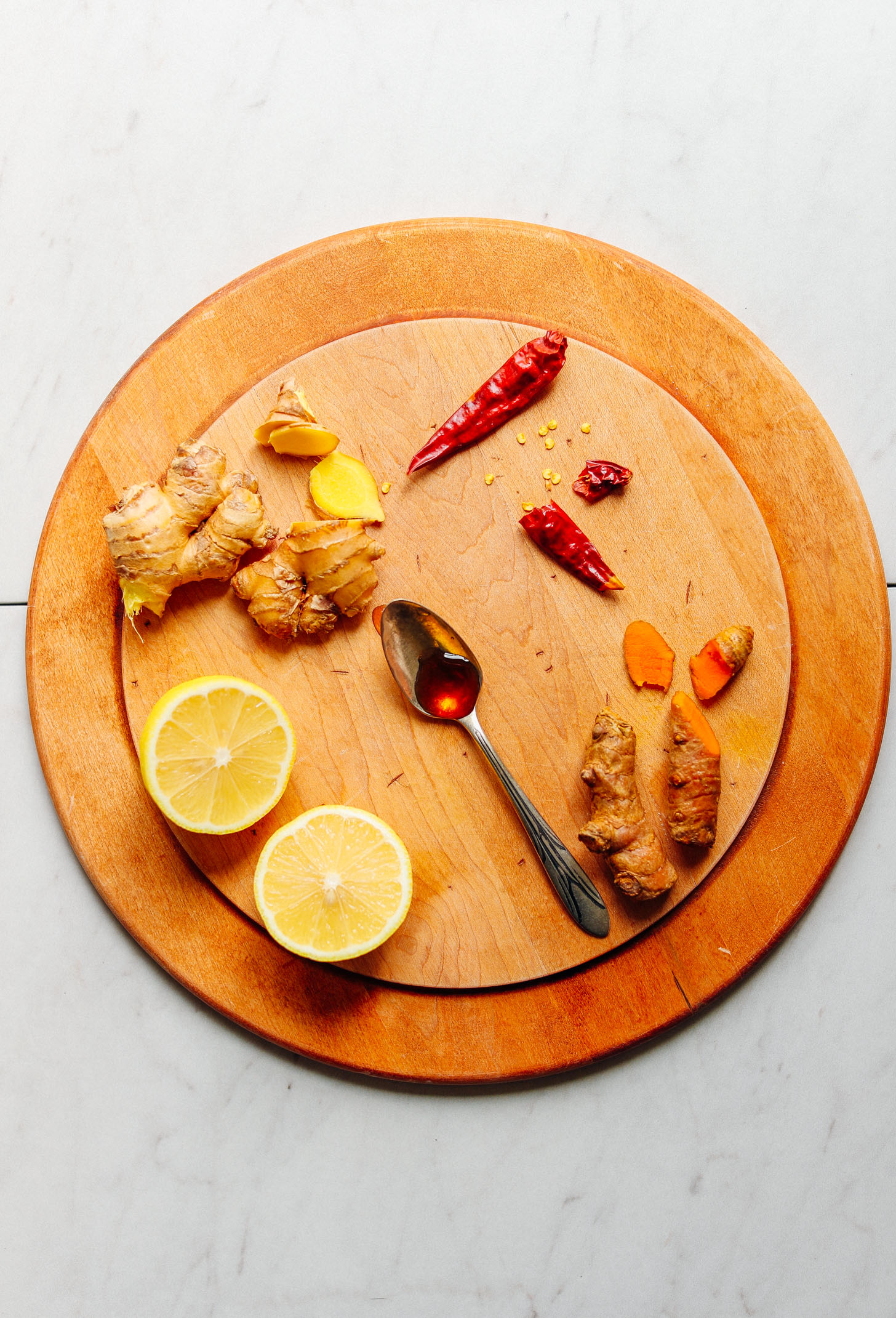 Super immune-supportive phytochemicals such as ginger and turmeric, both power players in the anti-inflammatory world. “Ginger has been used in food and medicine for millennia and may play a role in the early stages of colds and coughs,” says Rachel Fine, RD and owner of To The Pointe Nutrition (http://www.pointenutrition.com/) , a nutrition counseling firm in NYC. One study (https://www.sciencedirect.com/science/article/abs/pii/S0378874112007404) showed that fresh ginger inhibited plaque formation and viral activity against the respiratory syncytial virus (RSV), a common respiratory tract infection. Ancient turmeric, and its active constituent, curcumin, actually have serious antimicrobial properties. To aid in curcumin’s bioavailability or the rate at which the body can metabolize and absorb a nutrient, turmeric is best combined with black pepper (which increases its absorption by 2000 percent), and fat (in this case, coconut oil, but it’s often seen paired up with coconut milk). Add a pinch of cayenne, it boosts blood circulation and will ease a runny nose; Manuka honey, a probiotic food sourced from the tea tree and is packed with antibacterial properties; and lemon, high in vitamin C, “which is believed to help reduce the symptoms and duration of a cold if ingested routinely during the cold season,” says Fine. Think of this tonic as super leveled-up lemon water.

Ginger, Zingiber officinale Roscoe, is a common spice and also a widely used medicinal plant in ancient China. Ginger is an ingredient of Ge-Gen-Tang (Kakkon-to; GGT). GGT has been proved to have antiviral activity against the human respiratory syncytial virus (HRSV). However, it is unknown whether ginger is effective against HRSV. *Fresh, but not dried, ginger is effective against HRSV-induced plaque formation on airway epithelium by blocking viral attachment and internalization. (https://www.sciencedirect.com/science/article/abs/pii/S0378874112007404)

Ingredients: one batch, you can X 10 it for larger batch

2. Add in the coconut oil, ginger, and lemon juice; stir to combine.

3. Pour hot water over the spice/lemon juice mixture and stir to mix well.

Recipe notes: Drink one to three cups daily at the onset of a cold. Combined with extra rest, added hydration, and a conscious slow-down (it takes work to heal!), we’re betting you’ll start to feel better ASAP.

In the last two decades, coronavirus infection has gained much attention for its high mortality. The consensus from recent research is that the cytokine storm plays a crucial role in the development and progression of fatal pneumonia. Among those who experienced SARS-CoV infection in 2003, many manifested ALI and developed ARDS, and the death rate was greater than 10% (Peiris et al., 2004). Similar syndromes are seen in the MERS-CoV, H5N1, H7N9, and SARS-CoV2 infection. The high mortality rate from fatal pneumonia is due to the over-activation of immune cells in the lung (Channappanavar and Perlman, 2017).

No drugs are available to suppress overly immune response-mediated lung injury effectively. In light of the low toxicity and its antioxidant, anti-inflammatory, and antiviral activity, it is plausible to speculate that curcumin could be used as a therapeutic drug for viral pneumonia and ALI/ARDS. Curcumin Inhibits Inflammatory Reaction

The use of synthetic drugs has increased over the recent years, but plant-based drugs are more suitable in terms of least side effects. Since ancient times mankind has been dependent on plants for the treatment of various ailments, among them widely used is curcumin, the principal polyphenol extracted from turmeric. Their medicinal and useful properties are mentioned in Indian Veda’s and Chinese medicine. Curcumin has been studied extensively for its pleiotropic activity, including anti-inflammatory, anti-oxidant and anti-tumor activity. Accumulated evidence indicated curcumin plays an inhibitory role against infection of numerous viruses. These mechanisms involve either a direct interference of viral replication machinery or suppression of cellular signaling pathways essential for viral replication, such as PI3K/Akt, NF-κB. This review summarizes the current state of knowledge with a focus on the anti-viral effect of curcumin, and their possible molecular mechanisms. https://www.sciencedirect.com/science/article/abs/pii/S1756464617307399

People who should not take turmeric include those with gallbladder problems, bleeding disorders, diabetes, gastroesophageal reflux disease (GERD), infertility, iron deficiency, liver disease, hormone-sensitive conditions and arrhythmia. Pregnant women and those who are going to undergo surgery should not use turmeric.

In 1413, the bubonic plague was killing France, four thieves were charged with robbing from the dead and dying plague victims – a crime punishable by burning alive. The judge offered the thieves no death by fire if they would share the secret that allowed them to be in contact with the plague without contracting it. They explained they were spice merchants and perfume makers, unemployed as a result of the closure of France’s seaports. They created a potent herbal infusion – professing this had protected them from infection. As promised, the judge did not burn the men alive, leniently; he hanged them. Soon after, plague doctors took to wearing masks stuffed the thieves’ blend. For hundreds of years and countless plagues since its formulation, the thieves’ blend has been present as the first line of defense for Undertakers, Plague Doctors, and Grave Robbers alike. One of the popular blends of Thieves oil based on the Thieves story is a combination of clove, lemon, cinnamon, eucalyptus and rosemary. I suggest White thyme be added also.

Ivermectin a drug, that Is being used as a treatment for covid-19

Back in February 2020, i told you about this I thought id repost some of it

it was discovered in the 1970s, it’s commonly used as an anti-parasitic in farm mammals, it’s been being used in humans as an antiviral since the SARS epidemic, it is very effective against the covid-19 and other variants, it also is used as a cancer treatment, it exerts antitumor effects in different types of cancer. I have posted links in the comments below to various, published scientific papers covering the aspects of this drug doing all the way back to 2011. Buy this here: >>> Ivermectin Paste 1.87% for Horses with Worms, 0.21 ounces https://amzn.to/3rmcEKC

News and Papers on the usage of Ivermectin

This is about covid-19 treatment with this drug. It covers dosages and usage this is important. https://www.covid19treatmentguidelines.nih.gov/antiviral-therapy/ivermectin/

This article explains how this drug stops the replication of the virus inside the cell https://www.sciencedirect.com/science/article/pii/S0166354220302011

This article is from 2011, it talks about this drug being a miracle drug and all of its curative abilities. The drug was discovered in the ’70s. https://www.ncbi.nlm.nih.gov/pmc/articles/PMC3043740/

this article is from 2018, talks about how ivermectin exerts antitumor effects in different types of cancer. https://www.ncbi.nlm.nih.gov/pmc/articles/PMC5835698/

This article is from 2017, It is about this drug being used as a treatment for pancreatic cancer, I personally had a friend who extended her life many years by doing this. https://theconversation.com/this-new-treatment-could-make-pancreatic-cancer-a-manageable-disease-72699