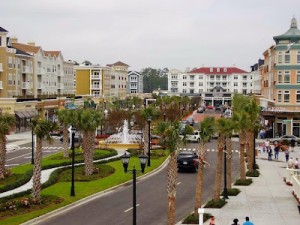 of a neighborhood, it is useful to consider various historic
resources and their importance in predicting and interpreting that neighborhood’s history.
Such resources can include: individual buildingsor sites, districts, or significant routes. In
some cases the early plans for the neighborhood could be critical in the development history
of the area, giving the neighborhood its urban form. Some historic resources can have
community-wide state or even national significance.
Myrtle Beach is located in Horry County, South Carolina, bounded on the east by a sixty-mile stretch of the Atlantic coast known as Long Bay. In Colonial days, the King’s Highway
from Boston to Frederica, Georgia, passed by the area. Some of the earliest landowners and
inhabitants of the Myrtle Beach area were members of the Withers Family, a prominent
coastal South Carolina family with principal homes in Charleston and Georgetown. The
Robert and Mary Cartwright Withers family settledhere in the 1700s. They owned an indigo
plantation on a bluff overlooking the Wither Swash. The Withers Swash was originally part
of a 66,000-acre land grant to Robert Francis Withers, who owned several other plantations
near Georgetown. According to an article in The Independent Republic Quarterly – Spring
1979, little is known of the family’s life in Long Bay but evidence of their being here is
provided by early plats of land grants at Myrtle Beach, the establishment of the Withers,
South Carolina Post Office on April 30, 1888, and the existence of a Withers family grave
marker in the Withers Cemetery located east of the swash off of Collins Street. When the
great hurricane of 1822 came ashore eighteen people sought refuge in the Withers’ house.
All eighteen people were washed out to sea. Years later, the Withers family abandoned their
land holdings and eventually Burroughs and Collins Company acquired the land. Withers
Swash was named “ Eight Mile Swash” on old maps, indicating that the waterway would
have been more extensive during Colonial times than it is now.
According to local historians two principal communities existed at this time – in the Withers
Swash area and an area called the “Sandridge”. The Sandridge was a farming community
situated between 17
th
Avenue South and 3
rd
Avenue North. Tobacco, peanuts, sweet
potatoes, and garden vegetables grew in the sandy soil of eastern Horry County. The farm
families lived on these crops. Timber was plentiful. Wild game was available. Oysters from
the inlets, crabs from the ocean, and fish from the sea and rivers were abundant. The Todd
family had occupied the Sandridge as early as the 1880s. The Todd family had amassed
several hundred acres south of the land acquired by the Burroughs and Collins Company.
Existing Conditions Neighborhoods
8/00 Myrtle Beach • Comprehensive Plan Page C.180
Other family names associated with the area were Owens, Stalvey, King, Anderson,
Simmons, Dubois, and Adams.
Places of worship have always been the foundation of a community and Myrtle Beach is no
exception. A group living in the area of the former air base site founded the First Baptist
Church, originally Eden Baptist Church, in 1870. In 1896 the church was moved one mile
closer to Myrtle Beach in the Sandridge area, and in 1933 a building was erected at 4
th
Avenue North and Oak Street.
Mount Olive A.M.E. Church, another important church in the
area, was formed in 1879 by the African-American community
but did not have a church building until 1910 when a wood
frame church was built on Kings Highway between 6
th
and 7
th
Avenues North. As reported by the 1880 Census, some of the
African-American family names associated with the area were
Allston, Canty, Holmes, Johnson, Small, Steele, Thomas, and
Vereen. 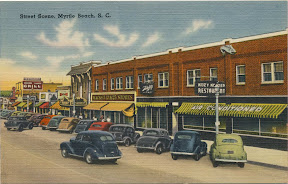 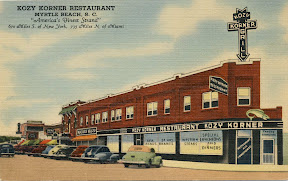