Let me tell you how get well, feel better all by removing toxins from your home, if you are interested in how to get well and our health please contact me so i can share this with you. i promise it will change your life.

Americans are exposed to an untold a number of chemi 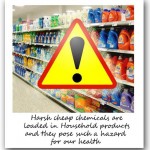 cals every day, and almost none of them have ever been adequately tested for safety. Our primary chemical safety law, the Toxic Substances Control Act (TSCA), is badly broken and hasn’t been updated since 1976—almost 40 years. We need to be working with key policymakers and stakeholders to make a smarter, stronger law that better protects you and your family, until then i can show you how! 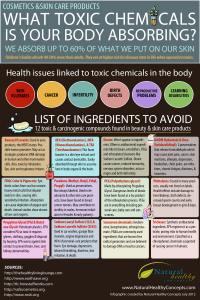 toxic home, BPA, PFC’S, Formaldehyde, Phthalates, Toluene, PBDE’s, Live Well, Achieve Wellness
some cleaners are among the most toxic products found in the home. In 2000, cleaning products were responsible for nearly 10% of all toxic exposures reported to U.S. Poison Control Centers, accounting for 206,636 calls. Of these, 120,434 exposures involved children under six, who can swallow or spill cleaners stored or left open inside the home. 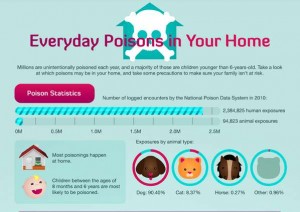 Some all-purpose cleaners contain the sudsing agents diethanolamine (DEA) and triethanolamine (TEA). When these substances come into contact with nitrites, often present as undisclosed preservatives or contaminants, they react to form nitrosamines – carcinogens that readily penetrate the skin. 1,4-dioxane, another suspected carcinogen, may be present in cleaners made with ethoxylated alcohols. Butyl cellosolve (also known as ethylene glycol monobutyl ether), which may be neurotoxic (or cause damage to the brain and nervous system), is also present in some cleaners. 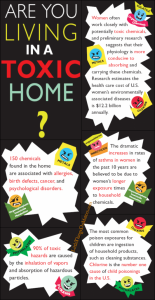 Chemicals that are so-called “hormone disruptors” can interfere with the body’s natural chemical messages, either by blocking or mimicking the actions of hormones. Possible health effects include decreased sperm counts, increased rates of male birth defects such as cryptorchidism (undescended testicles) and hypospadias (where the urethra is on the underside of the penis), and increased rates of some kinds of cancers. The alkylphenol ethoxylates (APEs) used in some detergents and cleaners have been shown to mimic the hormone estrogen; one APE, p-nonylphenol, has caused estrogen-sensitive breast cancer cells to multiply in a test tube study. 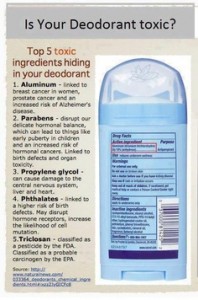 1. Phthalates
Found in: Many fragranced household products, such as air fresheners, dish soap, even toilet paper. Because of proprietary laws, companies don’t have to disclose what’s in their scents, so you won’t find phthalates on a label. If you see the word “fragrance” on a label, there’s a good chance phthalates are present.

Health Risks: Phthalates are known endocrine disruptors. Men with higher phthalate compounds in their blood had correspondingly reduced sperm counts, according to a 2003 study conducted by researchers from the Centers for Disease Control and Prevention and the Harvard School of Public Health. Although exposure to phthalates mainly occurs through inhalation, it can also happen through skin contact with scented soaps, which is a significant problem, warns Alicia Stanton, MD, coauthor of Hormone Harmony (Healthy Life Library, 2009). Unlike the digestive system, the skin has no safeguards against toxins. Absorbed chemicals go straight to organs.

Health Risks: Perc is a neurotoxin, according to the chief scientist of environmental protection for the New York Attorney General’s office. And the EPA classifies perc as a “possible carcinogen” as well. People who live in residential buildings where dry cleaners are located have reported dizziness, loss of coordination and other symptoms. While the EPA has ordered a phase-out of perc machines in residential buildings by 2020, California is going even further and plans to eliminate all use of perc by 2023 because of its suspected health risks. The route of exposure is most often inhalation: that telltale smell on clothes when they return from the dry cleaner, or the fumes that linger after cleaning carpets.

Healthier Choice: Curtains, drapes and clothes that are labeled “dry clean only” can be taken instead to a “wet cleaner,” which uses water-based technology rather than chemical solvents. The EPA recently recognized liquid carbon dioxide (CO2) as an environmentally preferable alternative to more toxic dry-cleaning solvents. Ask your dry cleaner which method they use. For a safer spot remover, look for a nontoxic brand like Ecover at a natural market, or rub undiluted castile soap directly on stains before washing.

Health Risks: Triclosan is an aggressive antibacterial agent that can promote the growth of drug-resistant bacteria. Explains Sutton: “The American Medical Association has found no evidence that these antimicrobials make us healthier or safer, and they’re particularly concerned because they don’t want us overusing antibacterial chemicals — that’s how microbes develop resistance, and not just to these [household antibacterials], but also to real antibiotics that we need.” Other studies have now found dangerous concentrations of triclosan in rivers and streams, where it is toxic to algae. The EPA is currently investigating whether triclosan may also disrupt endocrine (hormonal) function. It is a probable carcinogen. At press time, the agency was reviewing the safety of triclosan in consumer products.

Healthier Choice: Use simple detergents and soaps with short ingredient lists, and avoid antibacterial products with triclosan for home use. If you’re hooked on hand sanitizer, choose one that is alcohol-based and without triclosan.

Health Risks: Quats are another type of antimicrobial, and thus pose the same problem as triclosan by helping breed antibiotic-resistant bacteria. They’re also a skin irritant; one 10-year study of contact dermatitis found quats to be one of the leading causes. According to Sutton, they’re also suspected as a culprit for respiratory disorders: “There’s evidence that even healthy people who are [exposed to quats] on a regular basis develop asthma as a result.”

Healthier Choice: You don’t really need fabric softener or dryer sheets to soften clothes or get rid of static: Simple vinegar works just as well. “Vinegar is the natural fabric softener of choice for many reasons,” explains Karyn Siegel-Maier in her book The Naturally Clean Home (Storey Publishing, 2008). “Not only is it nontoxic, it also removes soap residue in the rinse cycle and helps to prevent static cling in the dryer.” White vinegar is your best choice for general cleaning; other types can stain.

Alternatives to chemical disinfectants abound, including antibacterial, antifungal tea-tree oil. Mix a few drops of tea-tree oil and a tablespoon of vinegar with water in a spray bottle for a safe, germ killing, all-purpose cleaner. Add a couple of drops of lavender essential oil for scent. 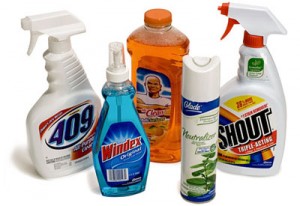 Health Risks: 2-butoxyethanol is the key ingredient in many window cleaners and gives them their characteristic sweet smell. It belongs in the category of “glycol ethers,” a set of powerful solvents that don’t mess around. Law does not require 2-butoxyethanol to be listed on a product’s label. According to the EPA’s Web site, in addition to causing sore throats when inhaled, at high levels glycol ethers can also contribute to narcosis, pulmonary edema, and severe liver and kidney damage. Although the EPA sets a standard on 2-butoxyethanol for workplace safety, Sutton warns, “If you’re cleaning at home in a confined area, like an unventilated bathroom, you can actually end up getting 2-butoxyethanol in the air at levels that are higher than workplace safety standards.”

Healthier Choice: Clean mirrors and windows with newspaper and diluted vinegar. For other kitchen tasks, stick to simple cleaning compounds like Bon Ami powder; it’s made from natural ingredients like ground feldspar and baking soda without the added bleach or fragrances found in most commercial cleansers. You can also make your own formulas with baking soda, vinegar and essential oils. See the “DIY Cleaners” sidebar for a list of clean concoctions.

Health Risks: Because ammonia evaporates and doesn’t leave streaks, it’s another common ingredient in commercial window cleaners. That sparkle has a price. “Ammonia is a powerful irritant,” says Donna Kasuska, chemical engineer and president of ChemConscious, Inc., a risk-management consulting company. “It’s going to affect you right away. The people who will be really affected are those who have asthma, and elderly people with lung issues and breathing problems. It’s almost always inhaled. People who get a lot of ammonia exposure, like housekeepers, will often develop chronic bronchitis and asthma.” Ammonia can also create a poisonous gas if it’s mixed with bleach.

Health Risks: “With chlorine we have so many avenues of exposure,” says Kasuska. “You’re getting exposed through fumes and possibly through skin when you clean with it, but because it’s also in city water to get rid of bacteria, you’re also getting exposed when you take a shower or bath. The health risks from chlorine can be acute, and they can be chronic; it’s a respiratory irritant at an acute level. But the chronic effects are what people don’t realize: It may be a serious thyroid disrupter.”

Healthier Choice: For scrubbing, stick to Bon Ami or baking soda. Toilet bowls can be cleaned with vinegar, and vinegar or borax powder both work well for whitening clothes. So does the chlorine-free oxygen bleach powder made by Biokleen. To reduce your exposure to chlorine through tap water, install filters on your kitchen sink and in the shower.

Health Risks: Otherwise known as lye, sodium hydroxide is extremely corrosive: If it touches your skin or gets in your eyes, it can cause severe burns. Routes of exposure are skin contact and inhalation. Inhaling sodium hydroxide can cause a sore throat that lasts for days.

Healthier Choice: You can clean the grimiest oven with baking-soda paste — it just takes a little more time and elbow grease (see recipes in “DIY Cleaners” sidebar). Unclog drains with a mechanical “snake” tool, or try this approach from the Green Living Ideas Web site: Pour a cup of baking soda and a cup of vinegar down the drain and plug it for 30 minutes. After the bubbles die down, run hot water down the drain to clear the debris.

Jessie Sholl has written about health for a variety of publications. She is also the author of Dirty Secret: A Daughter Comes Clean About Her Mother’s Compulsive Hoarding (Simon and Schuster/Gallery Books, 2010).

Beware of Greenwashing
If a cleaning product at your supermarket proclaims itself “green,” “natural” or “biodegradable,” that doesn’t necessarily mean it’s nontoxic. In 2010 the environmental consulting firm TerraChoice Group produced a report called “The Sins of Greenwashing.” In it the group found more than 95 percent of so-called green consumer products had committed at least one “greenwashing sin,” like making an environmental claim that may be truthful but unimportant. “CFC-free,” for example, is a common one, since CFCs are banned by law. Donna Kasuska of ChemConscious offers this advice: “When gauging ecological claims, look for specifics. ‘Biodegradable in three to five days’ holds more meaning than ‘biodegradable,’ as most substances will eventually break down with enough time.”